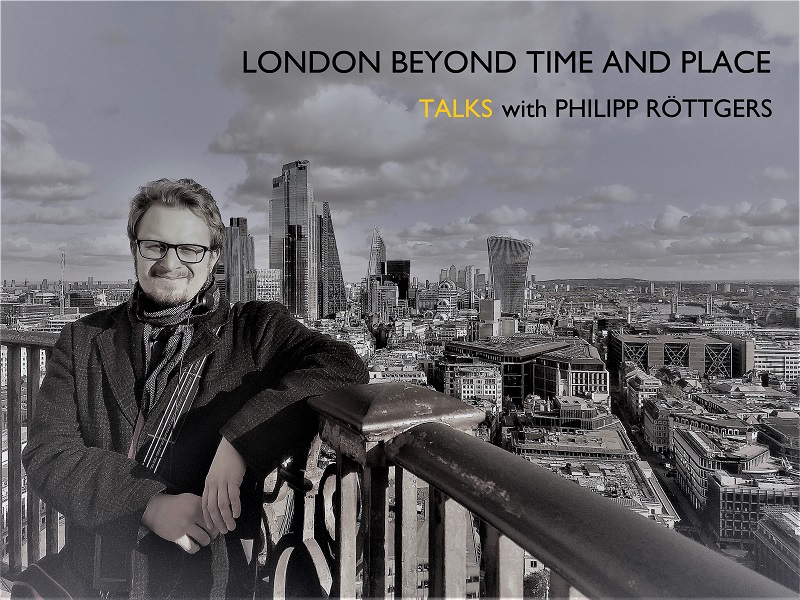 Not to be confused with his “Walks beyond time and place“, this is a series of online conversations. Every episode features another Londoner as a guest, and Philipp and his guest chat about how London influences their lives. They also cover certain topics, depending on the individual guest. Instead of being a strict interview, it feels more like a conversation in a pub. Among his guests are scholars, historians, tour guides and more – keep your eyes open for the next guests!

The episodes can be found here, on YouTube as videos and on Spotify and SoundCloud as podcasts.

David Charnick is a Londoner, a historian, a writer and a qualified City tour guide. Apart from doing his own “Charnowalks“, he is part of “Footprints of London” and is employed as a tutor for tour guiding. In the first episode of “Talks beyond time and place”, David shares his strangest moments as a tour guide and explains what London as a home means to him. Based on one of David’s tours, our main topic is London biographer Peter Ackroyd and his view on London, especially on London’s “Monstrous East End”. From the “trope of the tramp” in his works to Ackroyd’s imaginary projections: Follow us into Peter Ackroyd’s powerful, majestic and dark London, which is full of shadows.

EPISODE TWO: RICHARD JONES – TOPIC: “JACK THE RIPPER” AND HIS IMPACT ON LONDON

Richard Jones is one of London’s leading walking tour guides. He started in 1982, is a Blue Badge tour guide, an author and a broadcaster. Richard has written over twenty books on various subjects from Jack the Ripper to Charles Dickens to Haunted London and Britain. He appears regularly on international television as an expert on these topics.

In the second episode of “Talks beyond time and place”, Richard shares his stories from almost 40 years of guiding and broadcasting, like working with Bruce Dickinson of Iron Maiden or leading Green Day through the East End. Richard Jones is one of the leading experts about Jack the Ripper as well, so we also talk about the Ripper murders and their impact on London.

EPISODE TWO: RICHARD JONES – TOPIC: “JACK THE RIPPER” AND HIS IMPACT ON LONDON

Camila Oliveira is a William Blake researcher from Brazil and she has specialized in “Blake and Music”. In her PhD thesis, she discusses Blake’s reception in popular music in the 20th and 21st century. She interviewed musicians inspired by Blake’s work, for example BRUCE DICKINSON (IRON MAIDEN), TIM BLAKE, GORDON GILTRAP and ED SANDERS. She is also a translator and translated the lyrics of IAN ANDERSON’S JETHRO TULL “Thick as a Brick 2” into Portuguese. Currently she is working on a Portuguese translation of Blake’s magnum opus “Jerusalem, the Emanation of the Giant Albion”.

In the third episode of “Talks beyond time and place”, we discuss the influence of Blake on BOB DYLAN, JIM MORRISON, ALLEN GINSBERG, PATTI SMITH and BRUCE DICKINSON. She also shares her experiences of feeling like a foreigner when living in London and we try to find out if London is female or male.

Robert Kingham is part of “Minimum Labyrinth“, the creative partnership of Robert and Rich Cochrane. They have collaborated on many creative projects since meeting at Cardiff University in the early 1990s and they offer guided tours, audiobooks and much more London-related content.

In 2018, Robert produced “Pagan London”, a twelve-part documentary film series exploring London’s historical, mythical and contemporary pagan connections, in collaboration with the award-winning filmmaker Jeremiah Quinn. It can be viewed on Minimum Labyrinth’s and on Londonist’s YouTube channel. So on episode four of “Talks beyond time and place”, we chat about Pagan London!

Stephen is the author of “Dark Lines of London“, a time-travelling, supernatural and historical comic that he wrote together with Tony Lee, with graphic design coming from newcomer Mariela Malova. The story of “Dark Lines of London” is set in two time periods: One story is set in 1589 when Queen Elizabeth I is at the end of her reign and the so-called “School of Night” makes plans for the future of the British Empire. The group consists of Francis Walsingham, his daughter Frances, Sir Walter Raleigh, Christopher Marlowe, Thomas Harriot and of course Doctor John Dee, who is one of the main protagonists of the comic.

The other story is set in 2019. The English Literatures graduate Sam Carter finds a message in an ancient copy of Dee’s “Monas Hieroglyphica” that warns him of the School of Night’s plans to destroy London in 2020. He finds a way to converse with Doctor Dee in the past and together they plan to save the world.

In “Talks beyond time and place”, we talk about the comic, John Dee, the ley line from Mile End to Blackheath that Stephen discovered, and Marillion.

Wilton’s Music Hall can be found in Grace’s Alley off Cable Street in Tower Hamlets and is believed to be the oldest surviving grand music hall in Europe. It was built in the 1740s as an alehouse. In 1839, a concert room was built behind the bar that was greatly enlarged by the new owner John Wilton, who opened it in 1859 as “Wilton’s Music Hall”. Here, all the great Victorian artists like Arthur Lloyd, George Ware and ‘Champagne Charlie’ George Leybourne performed.

Harry is Head of Development and Communications at Wilton’s Music Hall. In “Talks beyond time and place”, we chat about the building’s history, the importance of the music halls for London, Cockney Sing-a-longs, memorable performances at Wilton’s and modern-day admirers and supporters like Cate Blanchett and Sir David Suchet.

Tara J Griffin is a London based storyteller and museum professional working regularly in the mediums of poetry, design, photography, and spoken word. She is also an anthropologist interested in the Pub.

Tara has a BA in Literature and Creative Writing from the University of Kent and an MA in Museum and Gallery Studies from Kingston University, where she excelled in innovative creative practices in heritage landscapes and was awarded the Prize for Outstanding Creative Practice 2019.

So in the eight episode of “Talks beyond time and place”, we chat about her dissertation project “Pubology”, about “Tara in the museum”/”Tara the curator” and about being employed as a tour guide in Freemasons’ Hall!

Frank Molloy aka “Soul City Wanderer” is the author of the book Soul City Wandering. He is a south London-born writer, journalist, producer, historian and guide. He has an MA in London history and is a qualified Blue Badge Guide, Westminster Guide and City of London Guide. He has lectured at various institutions including the Museum of London and the National Portrait Gallery. As an accredited journalist, he writes on travel and culture.

In episode nine of “Talks beyond time and place”, we talk about his London book “Soul City Wandering“, a guide book with London walks and a soft introduction to psychogeography. The book is fusing history, music and poetry. Its aim is to inspire travellers to engage as individuals with their journeys; to encourage interaction with time, place, motion & emotion. The places on the routes are not ‘hidden London’, they have been selected because they have a strong ‘synergy’, a soul.

T.G. Campbell is an award-winning crime fiction author and creator of the Bow Street Society.

The Bow Street Society is a fictional group of amateur detectives, operating in Victorian London, that feature in the murder mystery writings of T.G. Campbell. Each of its civilian members has been enlisted for their unique skill or exceptional knowledge in a particular field derived from their usual occupation. Members are assigned to cases, by the Society’s clerk, Miss Rebecca Trent, based upon these skills and fields of knowledge.

It is the first time that I have two guests in one episode of “Talks beyond time and place”! Vanessa Woolf and George Hoyle are professional London-based storytellers. Vanessa Woolf’s “London Dreamtime” is all about storytelling and much of it is inspired by the history and myth and folklore of London. She and her partner George Hoyle work together and separately on performances for children and adults and he is an extremely popular choice with schools, museums and festivals.

Jack Chesher is a lover of all things London, history and walking. On his website “Living London History“, he wants to uncover the history of London and help Londoners see their home in a different light, as well as helping visitors to get under the skin of this incredible city.

On “Living London History”, Jack published a blog and Self-Guided Walk about London’s Body-Snatcher Gangs. In today’s episode of “Talks beyond time and place”, we chat about the Resurrectionists and this unusual business from the beginning of the 19th century.

Peculiar London invites people to explore London with them. Whether you are a local or just passing through, their tours give you a different insight into London’s vibrant and colourful heritage.

On April 16, they start their tours again with “Dark Side of Docklands“, a hilarious immersive theatre walking tour in Wapping, that explores the murky waters of London’s maritime history. Featuring a cast of colourful characters including marauding pirates, ladies of the night and even royalty, who will give you insights into the now vanished world of London’s Docklands, once Europe’s largest and notorious Port.

Do you have any questions concerning our talks? Or questions that you think we should ask our guests? Or maybe you want to be guest on the talk? Get in touch with us!