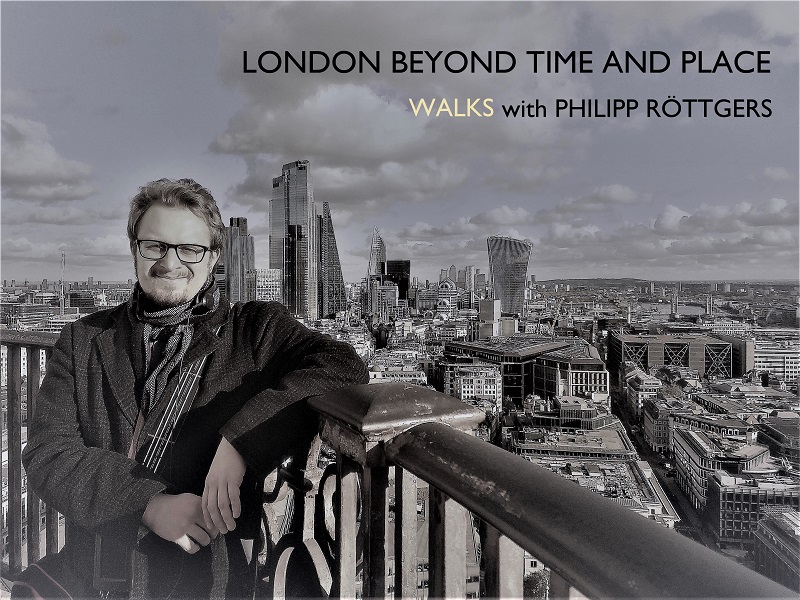 In 2019 his book “London and its genius loci – A journey beyond time and place” was published by Büchner-Verlag. In this book, he offers narrated walks which cover different parts of London. Philipps leads you to places which are both real and star in London literature by London-related authors such as Peter Ackroyd, Alan Moore, Neil Gaiman and Ben Aaronovitch.

For Philipp, London isn’t just some city. London is a setting in various films, novels and poems. Not only that, it is a character which defines the works in which it appears.

Philipp wants to share the fascination and connection that he feels for the city. In fact, he had felt the fascination even before he was there for the first time. And it grows everytime he comes back. So being an experienced London traveller and writer, he defined his very own London. And he wants everyone of his guests to feel the same. If you experience this great city by walking and through literature, it opens up for you and allows you to write your own story.

He leads you into the heart of darkness of the East End, you walk along “Ripper Street“, to the churches of Nicholas Hawksmoor, to the borderlands between the City, between east and west and to the doorstep of Sherlock Holmes and Charles Dickens. Discover London’s ‘genius loci’, its ‘spirit of place’.

Write your own story

Philipp leads you through London’s streets and thoroughfares while offering details of historic events and people. Of course, this is not a totally new way to learn more about London’s history. Many tour guides stroll the streets with their guests.

But Philipp offers some new aspects and tours. His approach is closely connected to the ideas given in Peter Ackroyd’s “London –  The Biography” and Matthew Green’s “London: A Travel Guide Through Time.”

Philipp’s idea is to look for the “genius loci” of London, the “spirit of place”. His walks are walks beyond time and place. With his approach, he takes you on a tour through London like no one else.

When you do a tour with Philipp, you will explore contemporary London while Philipp muses upon her historical quirks and speculates about how the city is touched and shaped by the tragedies they bore witness to. By including the representation of the city by certain authors and in certain works, he calls up an imaginary landscape that superimposes over what we know and learn of the physical London.

In addition to these scenic walks, Philipp gives a comprehensive overview of how London, in the past and present, has been depicted by writers.

Become a Patron on Patreon!

I appreciate all the support I get from my subscribers through sharing, comments and likes. If you’d like to further support me, you can through PayPal.