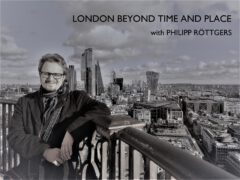 LONDON BEYOND TIME AND PLACE

Philipp Röttgers is a writer and musician and in constant search for London’s spirit. This search for the city’s “spirit of place” has led him on a journey beyond time and place. Along his way he has published a book, several articles and essays, walked the city alone and as a tour guide, founded the company “LONDON BEYOND TIME AND PLACE” and conversed with authors, musicians, tour guides, historians, curators, entertainers and time travellers who all feel a deep connection to the city and are inspired by it.

This has turned into a successful series of interviews in which London’s spirit is looked upon from different perspectives which allow you to feel the spirit of London in all its variety. Philipp feels deeply connected to London and the power emanating from this place. Therefore, he is fascinated by meeting people to tell him their personal “London story”.

Every episode features another Londoner as a guest, and Philipp and his guest chat about how London influences their lives. They also cover certain topics, depending on the individual guest. Keep your eyes open for the next guests!

If you want to explore the powerful and mysterious place that is London, I suggest two particular ways: through literature and through walking. With Philipp’s Self-Guided Walks and tours, you can discover London beyond time and place.

Tales beyond time and place

Eerie tales, strange mysteries and stories from London presented by London beyond time and place.

On Sunday, October 9, 2022, Philipp will give a conference talk at the 2022 Casebook: Jack the Ripper Conference:

“”Jack, der Aufschlitzer” – A German perception of the Ripper murders from 1888 to today, or: Jack the Ripper, the traveller beyond time and place.”

Become a Patron on Patreon!

I appreciate all the support I get from my subscribers through sharing, comments and likes. If you’d like to further support me, you can also support me through PayPal.

Walks beyond Time and Place

For Philipp, London isn’t just some city. London is a setting in various films, novels and poems. Not only that, it is a character which defines the works in which it appears.

Philipp wants to share the fascination and connection that he feels for the city. He leads you into the heart of darkness of the East End, you walk along “Ripper Street“, to the churches of Nicholas Hawksmoor, to the borderlands between the City, between east and west and to the doorstep of Sherlock Holmes and Charles Dickens.

Philipp leads you through London’s streets and thoroughfares while offering details of historic events and people. Of course, this is not a totally new way to learn more about London’s history. But Philipp offers some new aspects and tours.

Philipp’s idea is to look for the “genius loci” of London, the “spirit of place”. His walks are walks beyond time and place. With his approach, he takes you on a tour through London like no one else.

“It was a lot of fun. History became very real, because we went to the different crime scenes. It felt like going back in time. Phil explained everything in great detail and presented the history in a very comprehensible way.”

Talks beyond Time and Place

Inspired by his book and conversations with Londoners, Philipp set up “Talks beyond time and place”, a series of online conversations. Every episode features another Londoner as a guest, and Philipp and his guest chat about how London influences their lives. They also cover certain topics, depending on the individual guest. Instead of being a strict interview, it feels more like a conversation in a pub. Among his guests are scholars, historians, tour guides and more – keep your eyes open for the next guests!