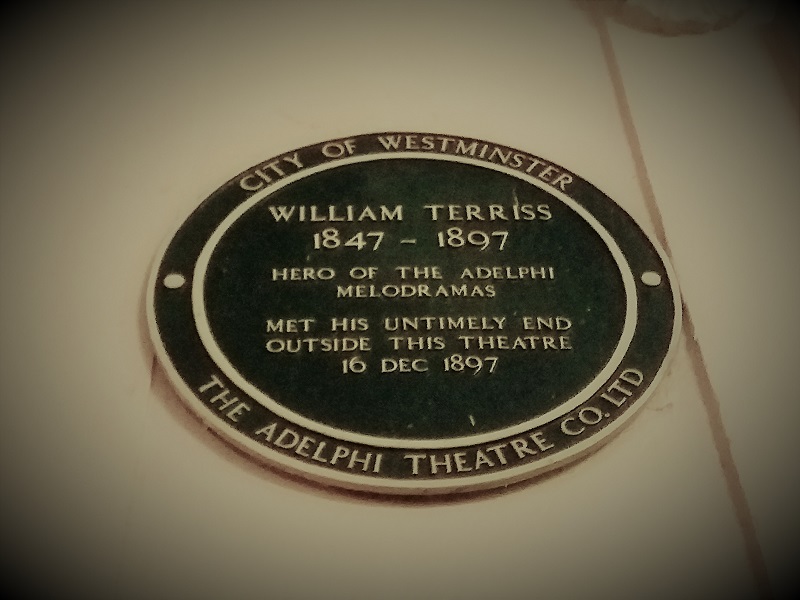 London beyond time and place Blog,London William Terriss – The ghost of a murdered actor

William Terriss (1847 – 1897) was the hero of the Adelphi melodramas. He was murdered outside the theatre in Maiden Lane on 16 December 1897. His ghost is said to haunt Covent Garden station.

The murder of William Terriss

William Terriss was a popular actor in his time. He was famous for playing Shakespeare and also for his Comedic roles and portraying the hero in many plays. He was part of Henry Irving’s company at the Lyceum Theatre and performed on all West End stages from Drury Lane to the Adelphi Theatre. One of his colleagues was Richard Archer Prince, a young actor. Terriss supported Prince financially. They played together in various plays and with every performance Prince became more and more jealous of the the well-liked, generous Terriss.

So in the early evening of 16 December 1897, Prince waited outside the stage door of the Adelphi Theatre in Maiden Lane with a dagger. When Terriss arrived, Prince attacked him and stabbed him to death. Terriss’ lover, leading lady Jessie Millward, was present. He died in her arms and whispered “I will be back”. Prince was arrested and found guilty. He was not sentenced to death, but put into Broadmoor asylum, where he died in 1937.

Sightings of a ghost at Covent Garden Station

Jack Hayden worked at Covent Garden Underground Station in November 1955. One night, he saw a tall distinguished-looking man on the platform. It was past closing-time. The man wore a grey suit, white gloves and had a cane in his hand. Hayden told the man that the station was closed and that he would let him out in a minute. When he turned to the man again, he had disappeared. No one was there.

Four days later he saw the man again. When he approached him, the man vanished. A few days later, Hayden and Station Woman Rose Ring were at Covent Garden Station. They heard screams from outside the staff room. They came from a young worker named Victor Locker. He claimed to have seen the ghost of a tall man.

Pictures of Terriss were shown to both Hayden and Locker and they agreed that he was the man they had seen. Locker was so frightened by the experience that his wish to being transferred to another station was granted.

Terriss is said to have visited a bakery in the area of Covent Garden Underground station. The last time his ghost was seen in Covent Garden Station was in 1972.

Sightings of the ghost at the Adelphi Theatre

Before haunting Covent Garden Station, Terriss’ ghost was seen in and around the Adelphi Theatre in Maiden Lane. The first sighting was in 1928. A man was approached in Maiden Lane by a strange figure in grey clothes from the turn of the century. The figure then vanished. The man recognised the apparition as William Terriss from a photograph of the actor.

In the same year, a leading comedy actress occupied the same room as Jessie Millward, Terriss’s leading lady and lover, by the time of his murder. On one occasion, the actress (only known as June) was resting in the room between performances. Her chaise-longue began shaking and she felt as if someone grabbed her by the arms and shook her. It stopped when two knocks came from the stage door that led to the street.

Two knocks on the door

This could have been any passer-by on Maiden Lane. But it was known that Terriss had always knocked twice on the door with his cane to let Millward know that he had arrived for the evening’s performance. After this experience, June had bruises on her arms for some days.

In one version of the story, it is said that a strange green light appeared in her room during the attack. It vanished after the two taps on the door. But the light was apparently also seen by two workmen in the Adelphi auditorium one night in 1962. They said it took the shape of a body that crossed the stage. Another workman, an electrician, said that he saw the ghost of a man in a grey suit crossing the auditorium while all the seats were tipping mysteriously.

However, the last sighting of Terriss’ ghost was probably in Covent Garden Station in 1972.