London beyond time and place Blog,London Sherlock: The London filming locations of series one

The world’s most famous detective Sherlock Holmes was created by Sir Arthur Conan Doyle in 1887. Holmes and his companion Dr John Watson have become iconic characters. The most recent fame came with the BBC series Sherlock, in which Holmes and Watson investigate in modern day London. The series was created by Steven Moffat and Mark Gatiss (who also plays Sherlock’s brother Mycroft).

It stars Benedict Cumberbatch as Sherlock Holmes and Martin Freeman as Dr John Watson. The show is a huge success all over the world.

So I’ve decided to show you around some of the London filming locations used in series one of the show. Let us dive into the city, of which Dr Watson writes in A Study in Scarlet: “that great cesspool into which all the loungers and idlers of the Empire are irresistibly drained.”

221b Baker Street, the home of Sherlock Holmes and Dr John Watson, was just an invention by Sir Arthur Conan Doyle. Baker Street exists, but the address 221b was just fictional. In 1990, they turned a Victorian house standing approximately at 221b into a museum. Inside the building they recreated Holmes’ appartment and recreated scenes from his famous cases.

The location is not used in the BBC series Sherlock! They used a different, more quiet street for their “Baker Street”. Even if its not featured in the series, any fan should pay a visit to the original Baker Street and the Sherlock Holmes Museum!

This is the location for Baker Street in the series Sherlock with Benedict Cumberbatch and Martin Freeman. They live here above Mrs Hudson (played by Una Stubbs). You can either stand in the doorway of “their” 221b Baker Street or even catch them up filming there. This spot is only used for exterior shots in the show, but it is featured in every season.

In Arthur Conan Doyle’s A Study in Scarlet, this is the place where Sherlock Holmes and Dr John Watson meet for the first time. Watson was a pupil at St Barts himself. The hospital is also used as a location in the TV show Sherlock.

Just like in the story, the pair meets here for the first time in the series. The hospital in Smithfield is featured in many episodes and plays an important role in the last episode of season two. It is also where Molly Hooper works, brilliantly played by Louise Brealey.

At St Bart’s you also find the only statue of Henry VIII in London.

Just around the corner of St Bart’s is the Central Criminal Court, called the “Old Bailey.” It is the greatest court in Britain and many, if not all, of the greatest and most important criminal cases and trials were held here. The exterior façade can be seen in a number of Sherlock episodes.

The South Bank Skate Park was saved from being demolished in 2014. It is located by the Thames between Hungerford Bridge and Waterloo Bridge. In the episode “The Blind Banker” graffiti artist Raz shows Sherlock and Watson cryptic symbols on the walls.

Today, you can find skaters and bikers practicing there. It is also worth a visit if you are into Graffiti art.

Just on the other side of the Thames stands the twirling sign of New Scotland Yard right in front of the headquarters of the Metropolitan Police. Here, Inspectors Lestrade (Rupert Graves) and Dimmock (Paul Chequer) and Sergeant Sally Donovan (Vinette Robinson) try to solve crimes with the help of Holmes and Watson.

Battersea Power Station was already featured on the cover of Pink Floyd’s “Animals” (1978). It is famous for its twin chimneys. Though not featured in series one, it should be noted that its deserted interior is the location where Sherlock first meets Irene Adler (played by Lara Pulver) in season two.

Gerard Street in Chinatown, Soho, appears in “The Blind Banker”, where Sherlock and John investigate in the area.

Before the 1970’s, the capital’s Chinese community lived in Limehouse in East London. It was a rough area by the Thames with many docks and in Victorian London, the area was associated with opium smoking and with crime. Conan Doyle was surely inspired by Limehouse and the surrounding areas when he wrote the Sherlock Holmes stories. Victorian Limehouse with its opium dens is the setting for a murder in the Sherlock episode The Abominable Bride.

If you want to pay a visit to a nice pub that fits the whole subject, I suggest you go to the Sherlock Holmes pub in Northumberland Street. It is a just around the corner from Trafalgar Square and worth a visit. The Victorian-styled pub displays memorabilia and objects related to the famous detective and there’s always a Basil Rathbone movie on one of the TVs.

In the upstairs restaurant there is a recreation of Holmes’ sitting room at 221b Baker Street.

His second book “London and its genius loci – a journey beyond time and place” was published in 2019. Philipp feels deeply connected to London, more than to any other place in the world. He is an expert in the capital’s (and Britain’s) literature and culture. He is also a „Ripperologist“ (and was already featured in the magazine of the same name) and of 2020, he also lead walks through London. Get in touch via mail for more information. 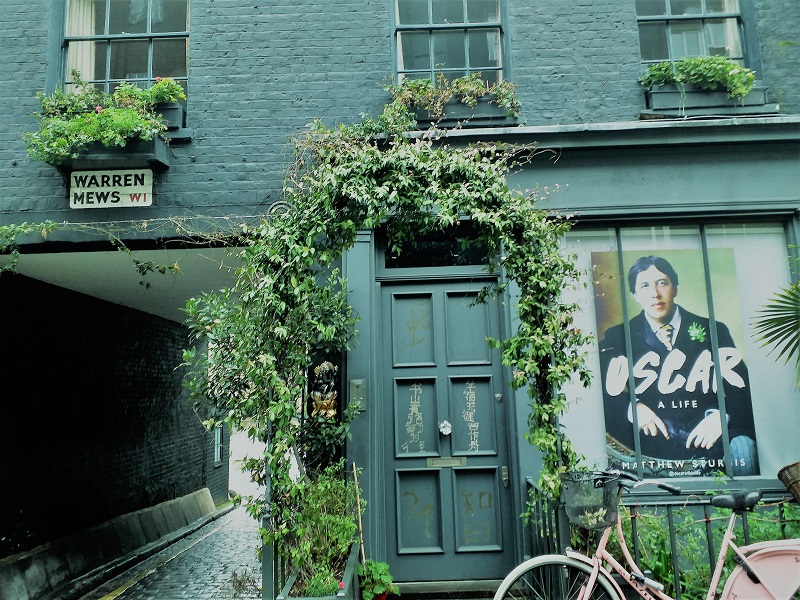