The Hound of the Baskervilles looked down on me. From a TV, Basil Rathbone and Nigel Bruce eyed me suspiciously. And the woman in front of me also looked me directly into the eyes. All I wanted was to get slightly drunk. At 1pm. Instead, I looked at a letter in my hands that was signed “Mr Punch”.

I was sitting in the Sherlock Holmes pub in Northumberland Avenue. The faces of Arthur Conan Doyle and his characters were painted on the lower windows of the pub. The upstairs room was a recreation of Holmes’s sitting room at 221b Baker Street.

“Explain that to me again, please.”

Her name was Liz and she was beautiful. She had long red hair and seemed tough and physically strong. And she obviously did not approve of my drinking habits. And the fact that I did not really understand or remember what she had just said. She took a deep breath.

“It was my grandmother. She disappeared. We were quite worried, but thought that she had maybe gone up to Scotland. Then my mother received a letter by “Mr Punch” like this one, but she thought it was a joke. But then she disappeared, too. And another letter arrived.”

I thought she had read too much Ben Aaronovitch. “And this is the letter?”

“Yes, this is the letter, Mr Pitts! They say you are the best man for this kind of job.”

I chuckled. “No one says that!”

“Okay, you are right. No one says that. But everybody else was busy, so I was forwarded to you.”

There certainly were better wizards in London. And I knew that some of them wanted to see me fail. Quite frankly, I did not care about that.

She sighed. “I think maybe I should have been more persistent at one of the other wizards.”

“How many of them have you visited before me?”

“Fair enough.” Rathbone and Bruce were fighting the Nazis on the screen in the background. Being a man, I was not able to listen to her and watch the TV at the same time, so I did not really get what she said next.

“So, what are you going to do? Protect me? Cast out some magic and everything will be over?”

“First of all, I am planning to have another pale ale.”

“Sir, I believe my mother and grandmother have been kidnapped and that I am going to be next!”

I took another look at the letter. “It says ‘You’re Next.'”.

She took a deep breath. “Yes. Just like the letter that my mother got.”

“Alright, well, we will have to find out who Mr Punch is and why he attempts to kidnap you. What is so special about you anyway?”

“You know what I mean. Why should someone try to kidnap your grandmother, your mother and every female member of your family?”

“The female members of our family have always been strong in comparison to the male members. The men drank and pretended to be heroes of war or British Gentlemen, but really, none of them were. And they secretly knew that.”

“So maybe it could be some kind of revenge. Maybe someone from the other gender in your family?”

The Hound of the Baskervilles on the screen howled.

“I have two cousins and a brother. They are all strange characters in their own way, but I do not believe that they would kidnap mom and grandma.”

“I beg your pardon?”

“My cousin, he is a bit of a racist. Right-wing attitude. The other one is a musician and part-time actor. And my brother, he was in the army, but he is nice and we are close to each other.”

“The actor. We should have a look at him.”

“Well, Mr Punch comes from Theatreland, doesn’t he? Do you have any pictures of your mum and granny?”

She showed me some photos on her mobile phone. They all resembled each other very much. All of them had red hair.

“Are you sure you do not stem from a family and are actually the Holy Grail?”

She looked at me with confusion in her eyes.

I continued: “Right, so I should probably find out more about this cousin. What is his name and where can I find him?”

“Michael. He is a street artist and occasional street musician in Covent Garden.”

“Can you come with me so that you can point him out?”

I looked back the TV screen.

“I’ll have another pint first.”

We took a stroll through the area. She smoked and I have to admit that I liked that. Occasionally I also smoke, so I pulled out my cigarettes and lit one. When we reached Covent Garden, the piazza was full of people. Here, Samuel Pepys had witnessed one of the first performances of a Punch & Judy show. Punch became one of London’s embodiments and one of the heroes of its people.

In my head, Marillion was playing. “Punch and Judy”, an old tune from the Fish era. I remember having a drink with the tall Scotsman after one of his London gigs once. He was very interested in wizardry and signed an old copy of “Script for a Jester’s Tear” for me. I promised to teach him some magic in return. I have always been a fan from both “eras” of Marillion, from Fish to Steve Hogarth. When I went to a concert with…

“I cannot see him.” Liz’s words brought me back. She took a look around. Someone was packing himself into a suitcase. Reggae music was blasting out of a ghetto blaster. “Maybe we should have a look inside Covent Garden. Maybe he is playing with some musicians in front of one of the cafés.”

We crossed the piazza and just when we went under the portico of the “Punch & Judy” pub, something crashed down on the pavement behind us.

People were screaming, shards were flying all around and instinctively, I threw myself against Liz.

I took a look up at the balcony and I could just see a person in a weirdly shaped mask disappear. Mr Punch.

Some people were coming closer, muttering things like “If the woman had been there just one second earlier, it would have hit her…”

I ran into the pub.

In front of the upstairs door stood a member of staff. “Sorry, upstairs is closed.”

“But someone just threw down a bowl of flowers!”

The puzzled look in his eyes said it all.

“Did anybody come down here?”, I asked.

With a curse I ran downstairs into the old familiar dark cellar-like bar room.

“Did you have one too many already?”

I hurried outside and past the tables and chairs, back to Liz. She came running towards me.

“I saw him!” She turned around and pointed. “There, running up towards King Street!”

I could see the backside of the red-clothed figure with the long white head hurrying into the street and I followed him right away. I could just see him turn left before Jo Malone and disappear into a small archway.

Knowing where it would lead, I was prepared to be attacked on the other side, but I was not. Instead, I came into the quiet and calm yard of St Paul’s church (Inigo Jones’ actor’s church, not the big Wren one). Tourists came out of the building, a businessman sat on one of the benches in front of the church, wearing a suit and eating his sandwich while talking into his mobile phone. On another bench sat a homeless man.

I decided to enter the church and hoped that I would not wake up one of the actor’s ghosts. Carefully, I went into the building. St Paul’s Covent Garden is small and cosy. Everything is made of dark wood. Homeless people sleep on the benches, their naked feet stretched against the plates of the many famous (and not so famous) actors commemorated here. Charlie Chaplin. Vivien Leigh. Peter O’ Toole. Boris Karloff. Margaret Rutherford. I could have used some help from Miss Marple now.

Mr Punch was not here. I went outside and to the homeless man on the bench. He seemed to me more sympathetic than the businessman who had just smeared his suit with mustard while talking into his mobile phone.

“Sorry, mate, has someone who looked like Mr Punch entered or left the yard or the church?”

“I know who you are.” His breath smelt heavily of alcohol.

“I know that you know. Most of you know that we exist and who we are. Some even live among you.”

“Well, thank you very much, mate. What did he look like?”

“Normal. Like a normal person. But I can tell you this: Three of his fingers were bandaged. He must have hurt or maybe burnt himself accidentally.”

“Thank you, mate.” I gave him some money, then I went back to Covent Garden. Liz was still standing next to the broken flower pot. She looked a bit horrified and seemed truly shaken.

“Look, I’ve got an idea. You will arrange a meeting with your brother and your cousins. I will watch you from afar. If one of them has three bandaged fingers, I will recognize our Mr Punch.”

“So, he has three bandaged fingers?”

“Yes. Until that meeting, do you want me to stay by your side, to protect you? I guess you do not want to be left alone?”

“I don’t. And I would prefer not to stay at home either. The kidnapper probably knows where I live.”

“You can stay with me. It is for free and no one will find you there.”

She relaxed a bit and smirked. “Ruben, I truly believe you.” I was not sure if she was sarcastic or not. 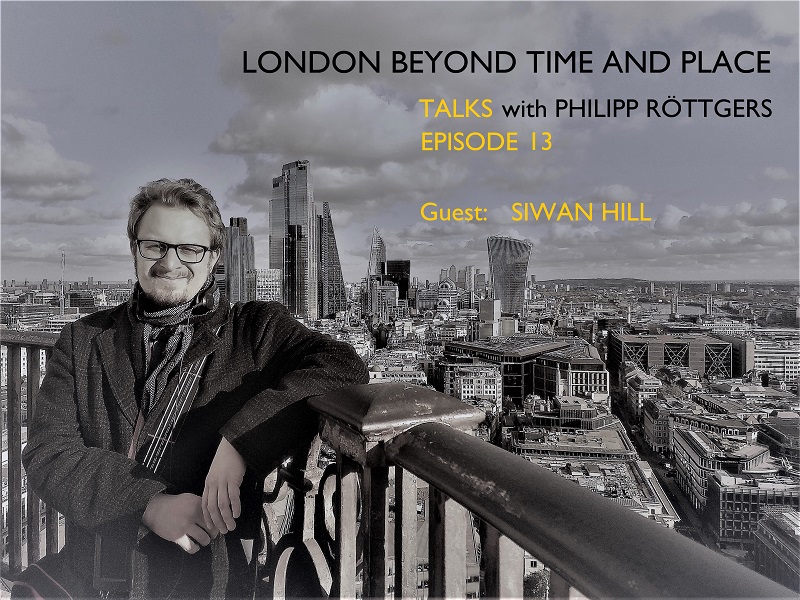 TALKS BEYOND TIME AND PLACE – EPISODE 13: SIWAN HILL OF “PECULIAR LONDON” Peculiar London invites people to explore London with them. Whether you are a local or just passing 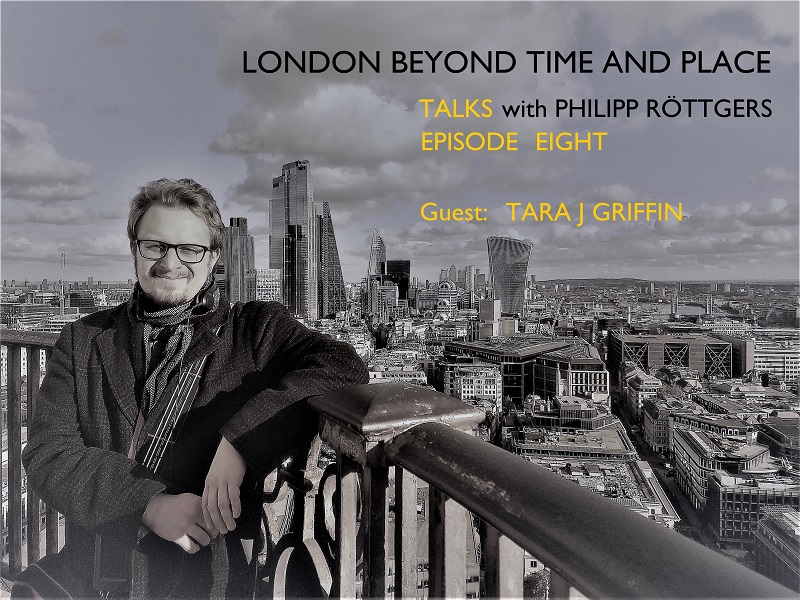 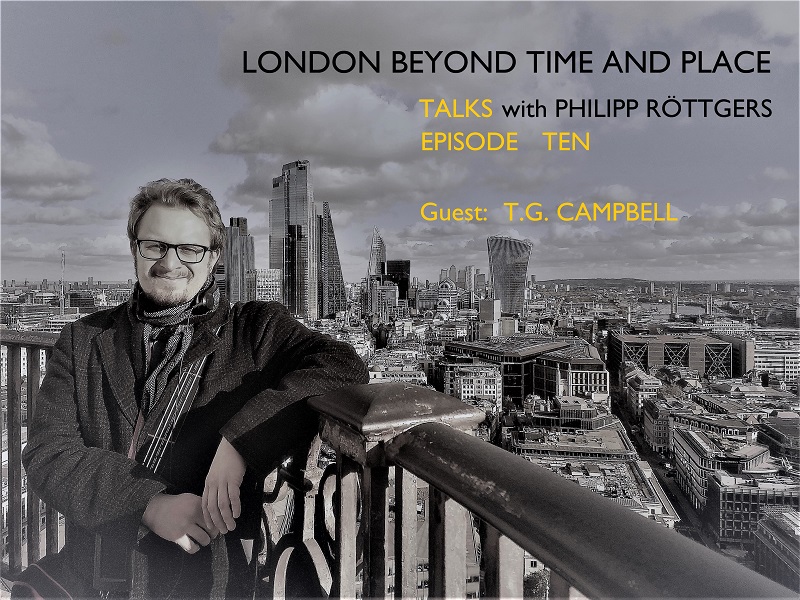